Back to top
Thesis defense 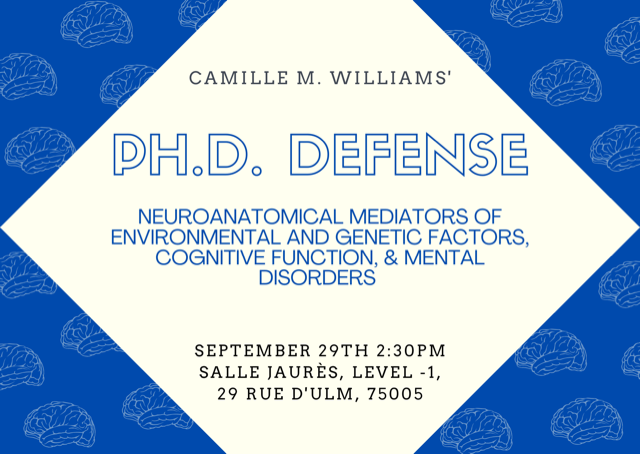 Dissertation submitted for the degree of Doctor of Philosophy Supervised by Franck RAMUS and Hugo PEYRE.

The goal of this dissertation was to examine the extent to which neuroanatomical markers mediate the effects of childhood adversity and genetic predispositions on either general intelligence (g-factor) or general psychopathology measures in the UK Biobank. In the first two papers, we established how global measures (e.g., Total Brain Volume, TBV) should be adjusted for when investigating regional effects independently from brain size in the UK Biobank (N = 40,028). We also examined the effects of age and sex, which influence brain anatomy. These analyses were performed on volumes (mainly grey matter), cortical thicknesses, and cortical surface areas and their asymmetries. In a third paper, we created phenotypic and genetic measures of general intelligence for the mediation models: Using factor analysis, we extracted a general intelligence score for a majority of UK Biobank participants that is partially corrected for sampling bias and estimated its quality. We then conducted a g-factor Genome-Wide Association Study (GWAS) on individuals in the UK Biobank without neuroimaging data (N= 187,288) and created a g-factor polygenic score (PGS) for individuals with neuroimaging data that explained 7.6% of the variance in intelligence (N = 26,819). In a fourth paper, we created binary mental health disorder (MHD) measures for a majority of UK Biobank participants by combining data from probable diagnoses, self- reported medical diagnoses, and hospital diagnoses, and examined how the prevalence of these MHDs differed between individuals with high versus average intelligence. By using a g-factor that is partially adjusted for sampling bias, we showed that, contrary to some claims, highly intelligent individuals do not have a higher prevalence of psychiatric disorders.
In a fifth paper in preparation, we created phenotypic and genetic measures of psychopathology for the mediation models. We conducted factor analyses on the 10 binary MHDs from the fourth paper. For the genetic analyses, we conducted a GWAS of each MHD excluding individuals with neuroimaging data and meta-analyzed these GWAS results with publicly available GWAS results for these MHDs that excluded UK Biobank participants. Using Genomic SEM, we applied the model structure identified from the phenotypic factor analyses to the genetic data. We then calculated PGSs for individuals with neuroimaging data (N = 26,610).
Finally, we examined whether global cerebral measures mediate the effects of psychopathology PGSs and childhood adversity on phenotypic psychopathology factors. In a sixth paper in preparation, we used the phenotypic and genetic g-factor measures from the third paper to examine the extent to which global and regional cerebral measures mediate the effects of the g-factor PGS and childhood adversity on the g-factor. We identified the regions that contribute to more intelligence than what is expected given their size and found that global measures were the primary mediators of the g-factor PGS&#39; and childhood adversity’s effects on the g-factor. Specifically, TBV was the greatest predictor of the g-factor and the strongest cerebral mediator of the g-factor PGS and childhood adversity. However, given that TBV only mediated only 7% of the g-factor PGS’s effect on the g-factor, future studies should explore alternative cerebral measures. This dissertation offers guidelines to adjust for brain size, provides phenotypic and genetic measures of general intelligence, MHDs, and general psychopathology for future UK Biobank studies, and contributes to the scarce literature on the cerebral mechanisms underlying the effects of genetic and environmental factors on general cognition and psychopathology.